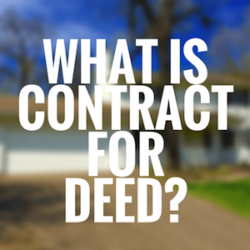 Some financial counselors predict that borrowers with limited options may turn to alternative means of purchasing a home. One such alternative is the contract for deed.

In a contract for deed, the purchase of property is financed by the seller rather than a third-party lender such as a commercial bank or credit union. The arrangement can benefit buyers and sellers by extending credit to homebuyers who would not otherwise qualify for a loan. Indeed, public and nonprofit housing advocacy organizations have used the contract for deed as a tool to help low- and moderate-income households attain homeownership.

Nonetheless, this alternative financing mechanism lacks many of the protections afforded borrowers who have traditional mortgages. In addition, these contracts may contain provisions that leave room for abuse and can pose risks and uncertainties for both the buyer and seller. The following article presents basic facts and features of the contract for deed and offers suggestions for minimizing the risks associated with this mortgage substitute.

Facts and features
A contract for deed, also known as a “bond for deed,” “land contract,” or “installment land contract,” is a transaction in which the seller finances the sale of his or her own property. In a contract for deed sale, the buyer agrees to pay the purchase price of the property in monthly installments. The buyer immediately takes possession of the property, often paying little or nothing down, while the seller retains the legal title to the property until the contract is fulfilled. The buyer has the right of occupancy and, in states like Minnesota, the right to claim a homestead property tax exemption. The buyer finances the purchase with assistance from the seller, who retains a security in the property.

The contract for deed is a much faster and less costly transaction to execute than a traditional, purchase-money mortgage. In a typical contract for deed, there are no origination fees, formal applications, or high closing and settlement costs. Another important feature of a contract for deed is that seizure of the property in the event of a default is generally faster and less expensive than seizure in the case of a traditional mortgage. If the buyer defaults on payments in a typical contract for deed, the seller may cancel the contract, resume possession of the property, and keep previous installments paid by the buyer as liquidated damages. Under these circumstances, the seller can reclaim the property without a foreclosure sale or judicial action. However, laws governing the contract-cancellation process differ from jurisdiction to jurisdiction and the outcome may vary within any one state, depending on the contract terms and the facts of the specific case.

Speed, simplicity appeal to buyers
Homebuyers may be attracted to a contract for deed purchase for several reasons. This method may be especially appealing to homebuyers who do not qualify for a mortgage, such as people who work cash jobs and are therefore unable to prove their ability to make payments. Since the contract for deed process is significantly shorter than the mortgage-approval process, it may attract buyers who face time constraints or have limited options, such as people who are losing their homes to foreclosure. First-time homebuyers who lack experience in the market or individuals who are wary of traditional financial organizations may also choose a contract for deed because of the relative simplicity of the buying process.

However, it is difficult to know exactly how prevalent contracts for deed are, because the nature of these arrangements allows the buyer and seller a degree of anonymity. Despite laws in some states that require the buyers or sellers in all contracts for deed to record the sale in the office of the county recorder or registrar of titles within a specified time period, the sales often go unrecorded due to a lack of financial and legal sophistication on the part of both parties involved in the agreement.

Historical objections
Before the rise of subprime lending in the 1990s, many buyers who were unable to qualify for traditional financing resorted to contracts for deed. Indeed, for most of the last century, the contract for deed was frequently used as an alternative to a mortgage or deed trust. Today, routine use of contracts for deed persists in some parts of the country. For example, in west central Minnesota, anecdotal information suggests that contracts for deed are a commonly used alternative to mortgages.

Still, some financial counselors and property law scholars regard the contract for deed as a “legal dinosaur” or an “anomaly,” and even call for its demise. They assert that the contract for deed has no place in modern property financing, offers no real benefits over the mortgage, and leaves both parties vulnerable to risk and uncertainty.

One major objection to the contract for deed is that it is closely associated with a form of predatory lending that was prevalent from the late 1980s through the 1990s. During this period, some neighborhoods—including those in North Minneapolis—experienced a predatory lending scheme known as equity stripping. In an equity-stripping scheme, an investor finds a homeowner facing foreclosure and approaches him or her with an offer to buy the home. After purchasing the home, the investor pays off the debt, sells the home back to the original owner on a contract for deed, and gains the equity from the transaction. Fortunately, these equity-stripping scams have faded from the scene in recent years—largely because homeowners facing foreclosure today have little to no equity for unscrupulous investors to strip.

Another objection to contracts for deed, apart from their association with nefarious equity-stripping scams, is that they have a reputation for offering little legal protection to buyers. Despite gaining home repair and maintenance responsibilities, buyers have limited ownership rights and control over their properties while they make payments to sellers. Buyers gain no rights of redemption through the transaction.

Until several decades ago, U.S. courts routinely enforced the forfeiture clauses of contracts for deed in the event of the buyer’s default. For example, if a homebuyer missed a single payment 15 years into a 20-year contract for deed, the seller could cancel the contract and retain the title and all the previous payments, while the buyer would suffer a substantial loss. However, such extreme cases are less common today. While a few courts enforce forfeiture provisions as written, most have become more sympathetic to complaints brought by the defaulting buyer, especially in circumstances where the buyer has already paid a significant portion of the purchase price. Courts today often view the contract for deed as analogous to the mortgage and, consequently, extend mortgagor’s protections to the buyer in cases of default.

The risks for buyers
Despite favorable changes in the legal enforcement of forfeitures, contracts for deed pose distinct risks for buyers. One major risk stems from the short time period required to cancel the contract in the event of default. For example, in Minnesota, when a buyer falls behind on payments, the seller can file a Notice of Cancellation of Contract for Deed with the county and serve the buyer with the notice. The buyer has only 60 days from the date of the filing to address the items of default and pay the allowable attorney fees to “reinstate” the contract. This is a short time span in comparison to the six months or more afforded mortgagors who face foreclosure. As a result, a defaulting contract for deed buyer has a much narrower window of time to find a new home and is likely to have limited housing options.

A risk for contract for deed buyers stems from the fact that the seller retains the title to the property during the life of the contract. Since the seller retains the title, he or she may continue to encumber the property with mortgages and liens. The seller is only obligated to convey good title when the purchase price is fully paid and it is time to deliver the title. He or she does not need to have good title at the time the contract is executed nor during the life of the contract. Depending on state law and whether the contract is recorded in a timely manner, the buyer’s interest may be junior in priority to these pre- and post-contract encumbrances placed on the property by the seller.

A tool for promoting homeownership
While the contract for deed may entail a litany of problems in the private market, this alternative financing device has proven to be a promising tool for the public and nonprofit sectors. Some housing funders and developers are using contracts for deed as a means of promoting homeownership for low- to moderate-income households.

Advice from the experts
While a contract for deed may have its appeal as an alternative financing device, given the risks involved, buyers and sellers should proceed with caution when entering such an arrangement in the private market. Both parties should make an effort to be fully informed.

The seller must set forth the terms of the contract in a purchase agreement. It is important that both parties fully understand the provisions of the contract, because once the purchase agreement has been signed, the options available to both the seller and buyer are limited.
The buyer should know whether he or she is responsible for property tax payments and insurance and whether the contract for deed includes a balloon payment. If it does include one, the buyer should be certain that he or she would be eligible for a mortgage to cover the payment when it comes due.
The buyer should also make sure that the seller is the true owner of the house by checking with the county recorder’s office to see who is listed as the registered owner.

Ensuring a positive outcome
It is important to note that despite their risks and sometimes negative associations, contracts for deed are not intrinsically bad. When used wisely, they can be a good fit for some consumers. Contracts for deed offer a swift, streamlined option for people who do not qualify for traditional mortgages or would prefer not to deal with mortgage lenders. When administered by public agencies or nonprofit housing organizations, contracts for deed can be a tool for building credit, promoting homeownership, and stabilizing neighborhoods.

To protect their interests in contracts for deed, sellers and buyers must do their homework, so to speak, by making sure they learn and understand what specific provisions and risks the contracts entail. Buyers in private contracts for deed should take additional steps. These include assessing the condition of the property, confirming that the seller has clear title, and recording the signed contract at the appropriate government office. By being informed and prepared, the buyer and seller in a contract for deed can help ensure a positive outcome for both parties.